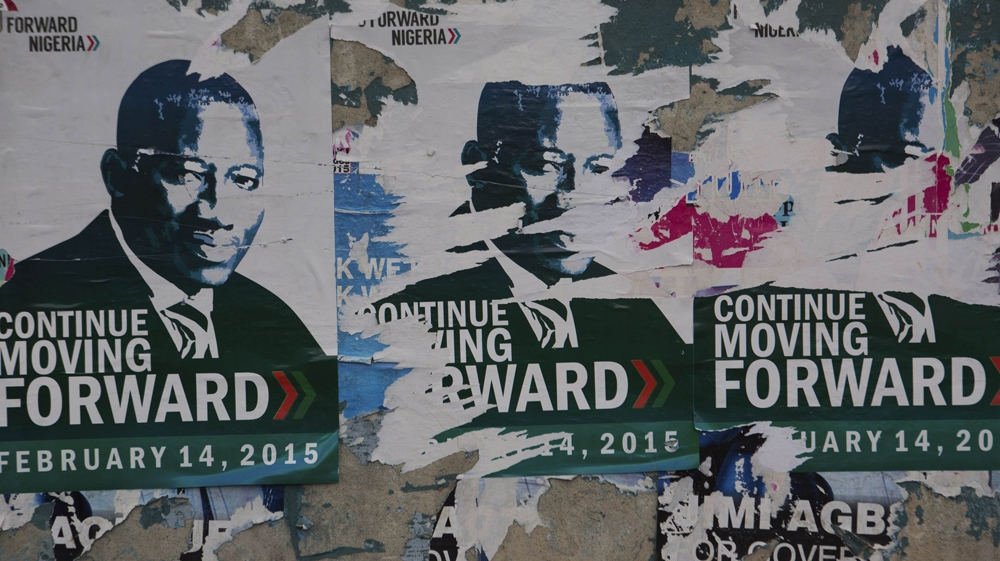 Lagos, Nigeria – Oluwaseyi Adepoju is a political man but he won’t be voting in Nigeria’s elections, now slated for March 28 after being postponed.

There’s simply no good choice to be made, he said. And even if there were, he lost faith in his country’s political system long ago.

Leaning forward, he pointed to a scar on his forehead. “You see this? This was from the last election.”

He was working for the Independent National Electoral Commission in Lagos state during the presidential vote in 2011, which was seen – by local standards – as relatively free and fair.

There, he was exposed first hand to the corruption of power-hungry party men, who one-by-one came to him with “envelopes” in the hope of persuading Adepoju to doctor the figures.

But he couldn’t be bought.

The repayment was a beating by thugs, who attacked him on the street as votes were being counted.

“This was from the butt of a gun,” Adepoju explained, tracing the line of his wound with a finger.

The coming vote pits the ruling People’s Democratic Party (PDP), which has led Nigeria without serious opposition since the return from military rule in 1999, against the two-year-old All Progressives Congress (APC).

In Nigerian personality politics, that means a choice between President Goodluck Jonathan, the nice-but-dim incumbent, and Muhammadu Buhari, an iron-fisted former military leader whose campaign has focused on anti-corruption measures and tighter security.

Recent public polls show a competition too close to call, with each party commanding about 42 percent of the vote.

Devil and the deep blue sea

Low levels of education across much of Nigeria, and a lack of “ideas” politics, means much of the vote will play out along religious and ethnic lines.

Jonathan, a Christian southerner, is strongly supported in his home in the oil-producing Delta region.

Buhari, a Muslim northerner, will win easily in the predominantly Islamic swaths of the north.

Yet, Nigeria also has a good share of swing voters, many of whom, like Adepoju, are left cold by the choices on offer.

“I voted PDP last time, because I believed in what they were saying,” said Emmanuel Essien, a Lagos-based driver. He was disappointed over progress, but did not see APC as a better alternative.

“I don’t like what any of these guys are saying.”

The reputation of Jonathan, who came to power when President Umaru Yar’Adua died in office, is tainted almost beyond repair. He is seen as weak and easily manipulated. Many locals say his government is the most corrupt yet.

Last year, the central bank governor was fired when he waved the red flag over $20bn in missing oil revenue.

The Nigerian National Petroleum Corporation (NNPC) said a forensic audit by PricewaterhouseCoopers accounting firm, which found $1.48bn had not been remitted, cleared it of wrongdoing, though this referred to another shortfall.

Separately, the coffers of the oil savings account have fallen from $9bn in December 2012, to $2.5bn in early 2015, despite buoyant oil prices over much of that period.

In the northeast of Nigeria, the devastation wreaked by Boko Haram’s attempts to establish an Islamic state has become synonymous with the government’s failings.

Some 18,000 people have died in the fighting, according to the Council on Foreign Relations. Yet there has been a lack of will to tackle the insurgency. Soldiers still go to battle poorly armed.

When President Jonathan visited Borno state in January, it was the first time he’d set foot in the region since 2013.

Many Nigerians wonder how things could get worse.

“The country’s not working,” said Leke Ayo-Ositelu, an e-commerce worker in Lagos. “This has been the worst government ever.”

“The present government seems to be clueless,” he said, adding he would prefer to be led by the “more experienced” and “stricter” Buhari.

He is too young to remember the short military rule of Buhari, which lasted 20 months from 1983.

During that time, the major-general earned a reputation as strict on corruption and security – at serious cost.

His rule was repressive and bleak.

Journalists and businessmen were detained. All public discussion of a return to civilian rule was forbidden. Furious officers flogged Nigerians who did not form orderly queues. In one case, a citizen was executed for a crime which did not carry the death penalty when he committed it.

Years later, Buhari declined to appear in front of a commission of inquiry set up to reconcile the abuses of the past.

“He refused … even though complaints that were tabled against him involved a career of gross abuses of power and blatant assault on the fundamental human rights of the Nigerian citizenry,” the Nobel laureate Wole Soyinka wrote in 2011.

Many of his supporters conveniently shrug off this past, or pin wrongdoings on his then-deputy, the despotic Tunde Idiagbon.

In part, that may be because civil society organisations say today’s democratic system will not permit such transgressions.

“Buhari was head of military government, it is hard to pin the human rights abuses specifically on him,” said Professor Adigun Agbaje, director of the Lagos-based Obafemi Awolowo Institute of Government and Public Policy.

“It is more important to work for change now than to think of 30 years ago.”

Buhari’s campaign team have worked hard to position him as the harbinger of that change, and most people do believe he will try to crack down on government corruption, and get a handle on the insurgency.

Yet the APC is made up of many of the old political elite.

If Buhari’s credentials on transparency are strong, those of several of the members surrounding him are not.

“I think Buhari is honest about anti-corruption, but there will be major difficulties implementing measures, especially given some personalities on his team,” said Malte Liewerscheidt, senior Africa analyst with the risk consultancy Verisk Maplecroft.

It is not only the choices that are depressing, but the credibility of the vote too.

Cynics such as Adepoju were given another reason to doubt their young democracy recently when authorities announced the poll would be delayed by six weeks.

Nigeria has delayed votes in the past, but this decision raised alarm bells because it was incited by the armed forces.

Days before the election was set to take place, military authorities said they would not provide protection for the vote across northeast Nigeria, because they were too busy fighting Boko Haram fighters.

Supporters of the government say the postponement will enfranchise citizens.

At the beginning of February, some 20 million voter cards were still to be distributed.

But for those who doubt their leaders’ good intentions, it casts an ominous glance back to the military government days.

Parallels have been drawn to 1993, when military rulers annulled the outcome of a democratic vote.

This week, a former president and PDP member Olusegun Obasanjo formally endorsed Buhari, expressing concerns that a “script is being played”.

The Financial Times quoted him as saying: “I sincerely hope that the president is not going for broke and saying, ‘Look … it’s either I have it or nobody has it’… I hope that we will not have a coup.”

“The military should have no role in determining the issue of elections,” said Shehu Usman, who organised an all-singing, all-dancing rally last weekend.

“People know what they are trying [to do].”

Nigerians are left praying that elections go ahead on March 28, even if their choices are bleak.

In his office on the Lagos mainland, Fakoya smiled as he recounted a joke made by his friend.

“We are sick of this corruption now,” he said. “At least show us a different kind. At least be original.”