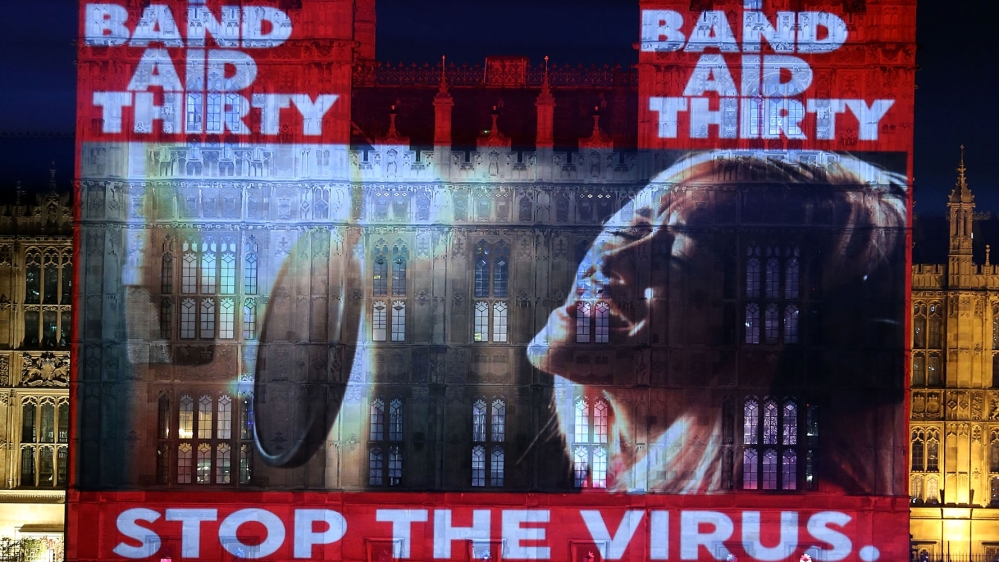 If you were given a “then or now” quiz in which you had to guess whether a given charity appeal was made today or 30 years ago, it could prove to be quite difficult.

The images of emaciated children staring at the ground, as poignant music plays in the background, have not changed – nor have inducements to give “just $3 a month”.

Similarly, were it not for the bouffant hairstyles and shoulder pads featured in the original 1984 Band Aid video – in which a group of Western singers recorded a song to raise money for a famine in Ethiopia – it might be impossible to tell it apart from the group’s 2014 reincarnation as Band Aid 30.

But not everything is the same. For instance, while the original Band Aid was widely lauded in the media, Band Aid 30 – formed to raise money to fight Ebola in West Africa – drew considerable backlash, largely from African commentators.

Liberia’s Robtel Pailey criticised the appeal for proposing short-term fixes for structural problems. Al Jazeera published a range of critical responses under the headline “We got this, Bob Geldof, so back off”.

Countless others logged on to Twitter to air their distaste at what they described as the pitying lyrics and white saviourism of the song “Do They Know It’s Christmas”, using hashtags such as #DoTheyKnowItsOffensive and #AfricansAgainstBandAid.

This may have been the most vocal pushback against a Western aid campaign to date, but it was far from the first.

For decades, non-governmental organisations have been criticised for portraying people in the global South as helpless and passive. In countless surveys, respondents have said they are sick of seeing guilt-tripping appeals. And since the 1980s, some NGOs have themselves subscribed to codes of conduct against using “pathetic images”.

So why are such images still around? The answer, in short, is that they work.

“A lot of people might say they’re tired of seeing negative images,” said Jennie York, team leader for individual giving and engagement at WaterAid, a London-based NGO that focuses on sanitation issues.

“But what we find when we attempt to fundraise in other ways is that people don’t respond.”

This is one of the major dilemmas faced by big NGOs today: They raise hundreds of millions of dollars in donations from the public each year, and rely on fundraising appeals for much of their finances – but what brings in money is not necessarily what they want to show.

“It’s very tempting to put pictures of starving African children on TV, because whether or not we like it, that is what gets people to respond at the moment,” explained Paul Vanags, head of fundraising for Oxfam.

“But we have to strive to do better than that, and that is always a live business issue for us.”

In fact, for decades, many NGOs have been trying to move away from the old stereotypes, which have been accused of demeaning those depicted and of contributing to a decline in public trust.

However, according to some, the problem goes far deeper than the imagery used.

In 2011, the UK’s Department for International Development funded a report that examined the public’s engagement with issues such as global poverty.

The findings made for a sobering read.

The researchers observed while donations had increased, self-declared concern for global poverty was declining or static, while the public’s understanding of the issue had barely increased since the 1980s.

This, the report suggested, was one of the legacies of short-term communications tactics used by NGOs and large celebrity-driven campaigns such as Band Aid and Live Aid. According to the report, the UK public still broadly believed that solving global poverty was a question of charity.

“Nobody believes you can solve global poverty with $5 a month, but that’s what the rhetoric of NGOs was claiming,” said Martin Kirk, former head of campaigns for Oxfam and co-author of the report.

“It was all short-term tactics and no long-term strategy. They were only worrying about how to get money out of people’s pockets tomorrow, and not at all about where they wanted the public to be in five or 10 years.”

In recent years, NGOs’ fundraising arms have become increasingly dominated by people from marketing backgrounds, or are outsourced to professional advertisers. Kirk believes that while this may increase donations, it may do so at the expense of longer-term goals.

“If you take a marketing mindset and if your only metric of success is income, the goal will be to tap into what people already think and reinforce that, because that’s what people will respond to,” he told Al Jazeera.

“But if we keep implying that global poverty is something to be solved with paternalistic charity, we can never move the public to understand that these are man-made systemic problems that need long-term systemic actions.”

According to Kirk, many NGO officials agree a new approach to discussing poverty is needed, but the need to fundraise has blocked any real change.

“‘Charity’ isn’t just a concept that NGOs use to communicate – it is the heart of these incredibly successful businesses,” he said.

That said, many fundraisers within charities do not see this lack of change as a problem.

For instance, Gemma Sherrington, director of new ventures and communities at Save the Children, told Al Jazeera: “We have a range of goals that differ depending on the campaign – and I don’t think there’s any contradiction between those goals.”

‘Things will simply have to change’

Meanwhile, NGOs are coming under increasing criticism from those in the global South who are unhappy with how their countries and people are portrayed. Unlike in the past, today’s hyper-connected world has made it easier for people to speak out, as the reaction to Band Aid 30 made clear.

“Africa and other regions of the world have come late to global conversations, but the rise of the internet has given people a voice,” said Chika Ezeanya, a Rwanda-based writer.

“They are starting to challenge simplistic narratives and negative stereotypes, and even Westerners now have access to better news. So when they see simplistic stereotypes, they sit back and think, ‘something is wrong here’ … Over time, and whether or not Western NGOs drive it, things will simply have to change.”

The original Band Aid campaign helped to entrench the idea in the West that charity is the solution to global poverty. Ironically, the legacy of Band Aid 30 – and the backlash it provoked – could be the beginning of the end of this belief.

The post Does charity have an ‘image problem’? appeared first on African Media Agency.