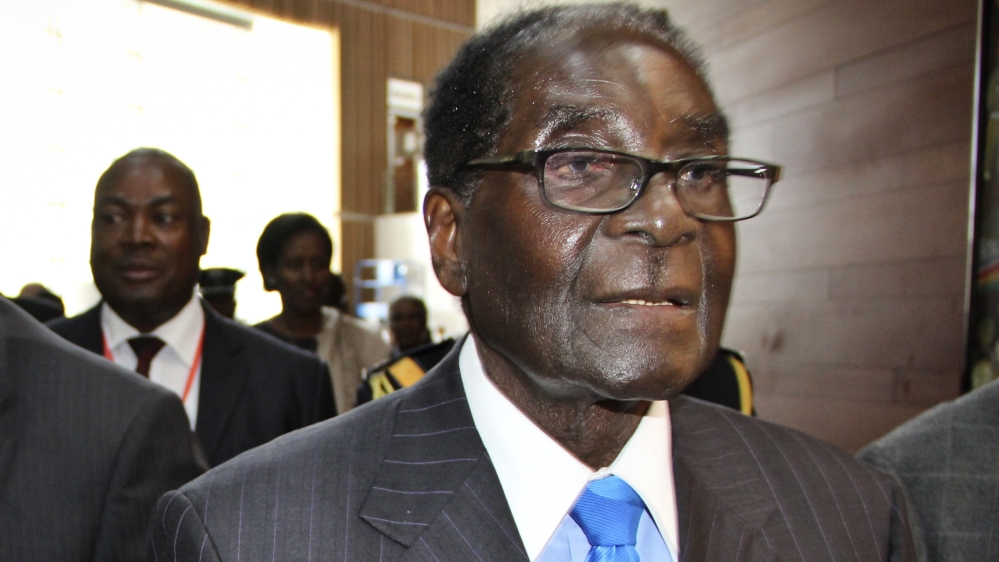 It’s my first trip to Zimbabwe – a country I’ve heard so much about, including the good, the bad and the ugly… but mostly ugly.

I’m here to cover the birthday party of a man hated and loved almost in equal measure across the world, Robert Mugabe.

And what a party! Most of the roughly 20,000 people have been brought to the famous Victoria Falls from all over the country in buses – and the more elite, in chartered flights.

It’s reported that the cost of the feast is roughly $1m – money that, according to Mugabe’s critics, would be useful in other ways.

“Even if they say these are donations, why can’t they have the donations deployed to the very poor of our society, to the downtrodden who are suffering the most?” Nelson Chamisa, an opponent of the government, asked.

Mugabe’s been accused of many things; from presiding over a government whose policies have run the country’s economy into the ground, to being a notoriously eccentric dictator who refuses to leave power; a man who is wrong for a country whose potential is just waiting to be harnessed.

So that’s the picture I had in my mind, and in notes I had scribbled from my, frankly, mostly internet research.

I expected to see shabby cities and towns overburdened by an obscene inflation rate with people full of despair.

Our producer, Cyrus Nhara, told me to tear up all my notes, however, and see Zimbabwe for myself. “You’ll be surprised.”

Well, the economy is in disarray, the majority of Zimbabweans are poor and some government policies have led to the country’s near collapse.

But on the face of it, the Zimbabwe that greets you is a very pleasant one, with people who refuse to give up.

I met many of them and passed lots of towns enroute to Victoria Falls about 1,000km west of the capital, Harare.

The landscape is amazing, changing seamlessly from green and lush, to Savannah grassland, all dotted with maize, tobacco plantations, wheat farms and then the expansive game reserve with its diverse eco-system.

My first visible sign of Zimbabwe’s fledgling economy was Bulawayo, the country’s second largest city, which was once a thriving industrial hub that employed thousands of people.

That was about a decade and a half ago.

Many of the factories have since collapsed. Millions of dollars worth of machines are rusting away. Those who remember say that Bulawayo was the place to be back in the day.

“We used to queue for taxis to go to work. Now those taxis queue, waiting for clients, and the clients cannot even afford to pay,” Busani Ncube, a resident, said.

Many people I talked to have fond memories of what once was, and are cautiously hopeful of what could be. They have no illusions about the weaknesses of Robert Mugabe and his government, but they also see the good.

Having been a teacher for 20 years, Mugabe is really passionate about education. Zimbabwe is reported to have one of the highest literacy rates in Africa.

He’s one of a few leaders who has stood up against the policies of Western countries, or the policies of “imperialism” as many here would say. “[Mugabe] does not hold back. He says it as it is,” one man told me.

Mugabe has also empowered black Zimbabweans. Perhaps his biggest achievement, and according to some a failure, was a land reform policy that arguably marked the beginning of the downfall of the country.

He and other freedom fighters won independence mainly on a platform of reclaiming land back from the white minority.

The turn of the century unleashed a wave of violent land acquisition by war veterans. Thousands of white farmers were forced out.

Many Zimbabweans agree that the black majority had to somehow take back the land. After all, about 75,000 hectares of productive land was owned by white farmers who make up only 1.5 percent of the population.

How the whole land indigenisation policy was conducted remains deeply dividing. Land, like in many other African countries, is a very emotive subject.

So at Mugabe’s 91st belated birthday party, those invited, his fierce loyalists and the youth league that has been organising these parties since 1986, say they choose to focus on the positives of Robert Mugabe: a Pan-African, they say, who has always advocated for African solutions to African problems.

But his critics, and they have rapidly increased over the years, will find it difficult to see the positives in the fog of all the bad news.

“The human brain is peculiar. It remembers today, not yesterday,” one person told me.

Many are increasingly saying that Mugabe should have long ago stood on the right side of history, and quit while he was ahead.