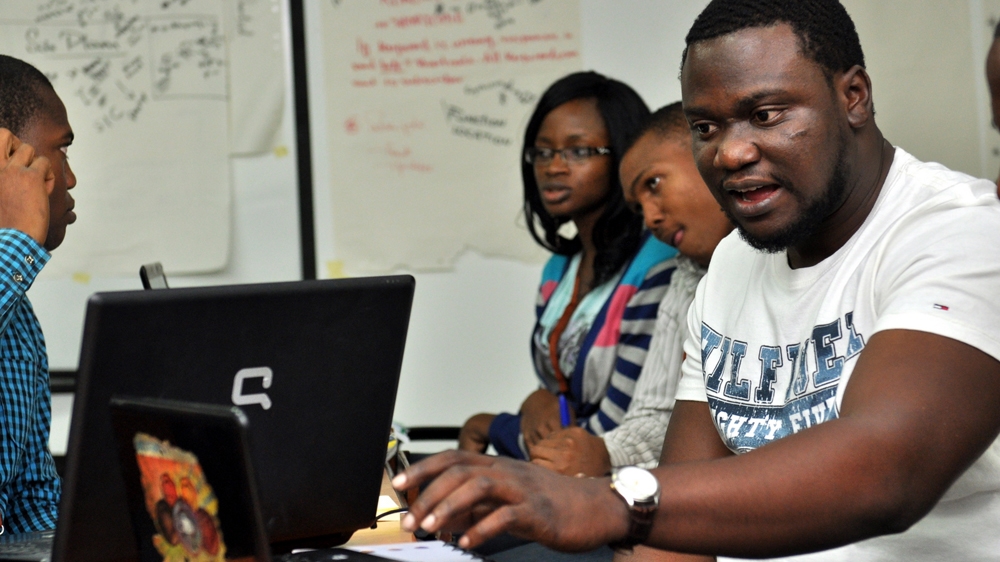 The stakes are high in Nigeria’s presidential election on March 28. Ethnic tensions, Boko Haram’s violent attacks, and the “north-south divide” have spurred speculation about a post-election crisis.

Citizens are watching closely and they want to be heard. Simple new technologies are giving them a chance to scrutinise their candidates and parliament more closely and to have their say.

Activist Hamzat Lawal set up Connected Development (CODE) – a non-government organisation whose mission is to improve access to information and empower local communities in Africa – to amplify the voices of marginalised communities, and ensure the government delivers on its election promises.

“In Nigeria today, young people have never been more interested in election and governance issues. This is really exciting and has triggered a series of off and online campaigns which have challenged aspirants and political parties,” Lawal said.

Together with another NGO Vote or Quench, the two groups developed a tweet chat tagged #AirItOut that provides a platform for disengaged youth to have their voices heard, he said.

“We aim to increase civic awareness and serve as an outlet for objective opinions, beyond the extremes of partisan thuggery or unabashed indifference.

“We also have face-to-face round-table discussions to bring in opinions from those offline.”

Bringing in offline voices is crucially important in a country where just 38 percent of the citizens are online.

CODE recognised the power of technology to hold government to account long before the election frenzy.

In 2011, poor mining practises in the Bagega region resulted in lead poisoning that killed 400 children, while thousands became sick. The government pledged funds to the region for critical healthcare, but two years later, it hadn’t arrived.

CODE collected testimonies and evidence from the affected community – who were largely offline – and exposed the situation online through the #SaveBagega hashtag and posting infographics and stories on its website.

Senator Bukola Saraki, chairman of the Senate Committee on Environment and Ecology, 48 hours after hosting a tweet-a-thon, announced the president had approved the immediate release of $5.2m in funds for healthcare remediation in Bagega.

They’ve tracked the treatments ever since.

“Technology penetration is increasing in Nigeria. Even government officials and institutions have opened Twitter and Facebook accounts and mobile penetration stands at 75 percent,” said Babayemi.

“If we direct coordinated messages to government agencies and policy-makers and create a feedback loop through SMS platforms and Blackberry messages, we can reach millions within hours. We’ve shown how this results in government action and citizen empowerment.”

In the upcoming election, ReclaimNaija is using FrontlineSMS to engage the offline population.

Citizens can report issues such as missing names or election fraud. They can send reports by SMS that are visually mapped on the Kenyan platform Ushahidi.

During the January 2011 Voters Registration Exercise, they received more than 15,000 reports from the public in just two weeks.

The Independent National Election Commission (INEC) regards these reports as valuable information that can be validated and used as evidence of malpractice.

Many of these solutions are created locally.

Across the globe, technologists and innovators are congregating in innovation hubs, enabling local talent to create solutions to the challenges their communities face.

“Hubs debunk the general perception that good governance is the sole responsibility of governments by engaging talented individuals and non-state actors in co-creating novel solutions that bridge the gap between citizens and government. Not only are citizens now demanding better governance, talented members of the hubs are creating tools to encourage widespread social accountability.”

The team drew upon the talents of their community and partnered with Enough Is Enough, an organisation promoting good governance and social accountability in Nigeria to create GoVote.ng.

The platform helps citizens navigate a complicated registration and voting process and gathers feedback from citizens, which is relayed to the Independent National Election Commission to enable improvements.

BudgIT, an organisation incubated at Co-Creation Hub, creates infographics that help the public better understand the budget. They engage in online and offline dialogue that encourages citizens to ensure it’s being used for public good.

They’ve also created TRACKA, which enables people to collaborate and track capital projects in their communities online. They received a citizen report about an uncompleted school building in Iwoye-Ilogbo, a rural community in Ogun state, where 429 pupils sat in two classrooms with exposed roofs.

Despite budget allocation to rectify the situation, the government ignored community requests to come to their aid.

Through informing the community of their rights in face-to-face meetings, the team stimulated community action, putting pressure on the government. It worked, and the school is currently being repaired under BudgIT’s watchful eye.

Another community member, Zubair Abubakar, created the Nigerian Constitution application, which has been downloaded more than 900,000 times, demonstrating a thirst for such information. He recognises its role in empowering citizens to stand up for their rights.

“This mobile application has equipped ordinary Nigerians with knowledge of the laws that govern them so they can easily stand up to the government if it’s not performing,” said Abubakar. “It was used during the 2012 fuel subsidy protest to educate fellow Nigerians about the roles and responsibilities of the government, and we saw a huge spike in downloads.”

These groups are well aware that technology’s not a panacea to all social problems. But they recognise its power to amplify the impact of traditional community mobilisation, at a cost and scale never before possible. This enables citizens to scrutinise their elected representatives and demand they deliver on their promises.

The outcome and aftermath of Nigerian’s election remains to be seen. But one thing is certain – Nigeria’s citizens are watching.