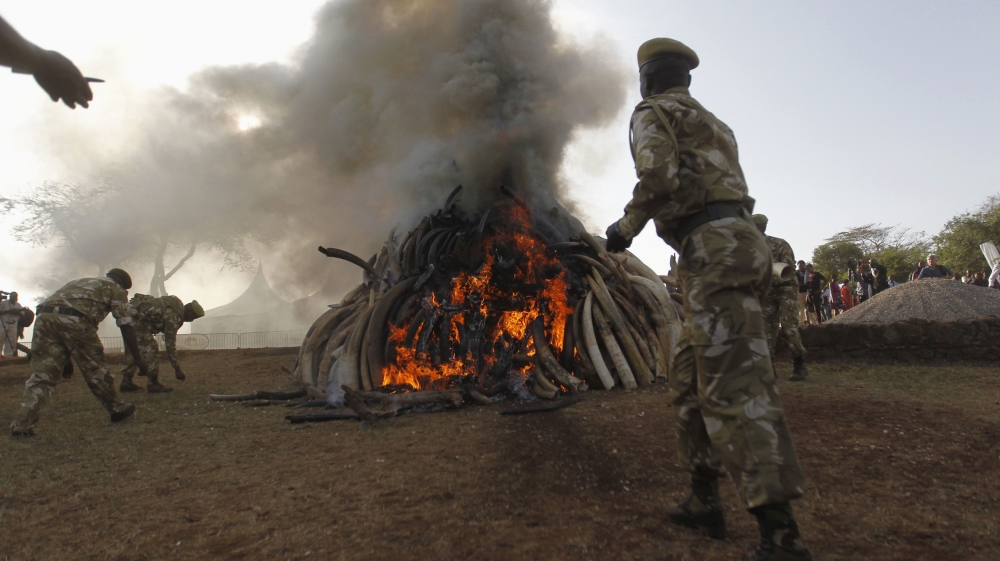 It is a ritual we have been treated to by every administration since the Nyayo days. The government rolls out part of its stockpile of ivory and the president lights a bonfire for the cameras. The flames are meant to illuminate the state’s commitment to the preservation of our wildlife, to ending the international trade in ivory and other wildlife products and to the fight against poaching.

Uhuru Kenyatta got in on the act on Tuesday when he lit up 15 tonnes of ivory tusks in the Nairobi National Park. It is the largest haul to receive the presidential baptism of fire. By comparison, Daniel arap Moi torched 12 tonnes in 1989, while Mwai Kibaki only managed a relatively measly five tonnes. Further, “to underline Kenya’s determination to eradicate poaching”, according to the president’s website, “the government will burn the rest of its contraband ivory stockpile within the year”.

Last year, African elephant populations passed what was described as a crucial “tipping point”. Essentially, more jumbos are being killed than are born. As reported in the Los Angeles Times, according to one study, the continent lost about a fifth of its elephant population – an estimated 100,000 elephants – between 2010 and 2012. And the share of elephant deaths attributed to poaching has shot up from 25 percent a decade ago to 65 percent today.

The Kenya Wildlife Service claims the country has lost 466 elephants in the last two years. But in an opinion piece for the Guardian last year, conservationist Dr Paula Kahumbu said nobody in Kenya believed the KWS numbers. Her own estimate of the number killed in just the first month of last year was 10 times the official figure. A 2014 census of elephants and other large mammals in the Tsavo-Mkomazi ecosystem, which straddles the Kenya-Tanzania border, showed that the population had declined by 12.5 percent or over 1,500 animals.

Any way you cut it, our elephants (and rhinos) are in crisis. And it is true that this is largely driven by Far-Eastern, especially Chinese, demand for wildlife products – a fact any conservationist or Kenyan government lackey will gladly point out. However, they are less candid when it comes to the liability of the Kenyan state itself.

In March 2014, an investigation by KTN reporter, Dennis Onsarigo, revealed that President Uhuru Kenyatta’s administration was not only aware of the identities of the top 11 poaching kingpins, but was actively protecting them.

A year later, this fact appears to have only succeeded in eliciting a stunning silence from the media and the normally vocal conservation community. There have been neither public demands for the allegations to be further investigated nor for action to be taken against either these specific individuals or their protectors.

It mirrors the silence that greeted revelations in late 2013 that “decorative” pieces of ivory were stolen from the offices of the president and first lady in State House, Mombasa. According to one report, these included pieces that weighed up to 100kg. And all this during a period when Margaret Kenyatta was busy launching the “Hands Off Our Elephants” campaign.

Few since have sought to know what ivory was doing in the Kenyattas’ official residence and offices. Few appear keen to point out the hypocrisy of the president’s office being decorated with ivory at the same time we are shaming others for doing the same. Is it still there? If so, will it be part of the “contraband” the president has promised to destroy. Predictably, the government has not seen fit to volunteer this information.

Since the Kenyatta administration took office, there has been a marked reluctance to challenge the conduct of the government and its officials in executing their duty to protect our natural heritage.

Apart from a brief bust-up when the administration refused to declare poaching a national disaster, conservationists and the media have largely pursued a strategy of non-confrontation. But this is appearing more and more to be a losing one. It is all fine to rant and rave against the (mostly illegal) international ivory trade. However, ignoring the government’s alleged role in the slaughter at home undermines any international effort to stamp out the trade.

In fact, the silence only allows the state to present a false face to the world and to hide its mischief behind a pile of smoking tusks. The administration can always rely on dramatic pictures of burning ivory to obscure any critical interrogation of its record. It is a good and dependable public relations ploy. Unfortunately for our elephants, it is no substitute for effective policy and action to protect them.

Patrick Gathara is a strategic communications consultant, writer, and award-winning political cartoonist based in Nairobi.

Inside the battle for intelligence in South Africa

Covid-19 concerns: Cases are rising rapidly in Africa, says WHO