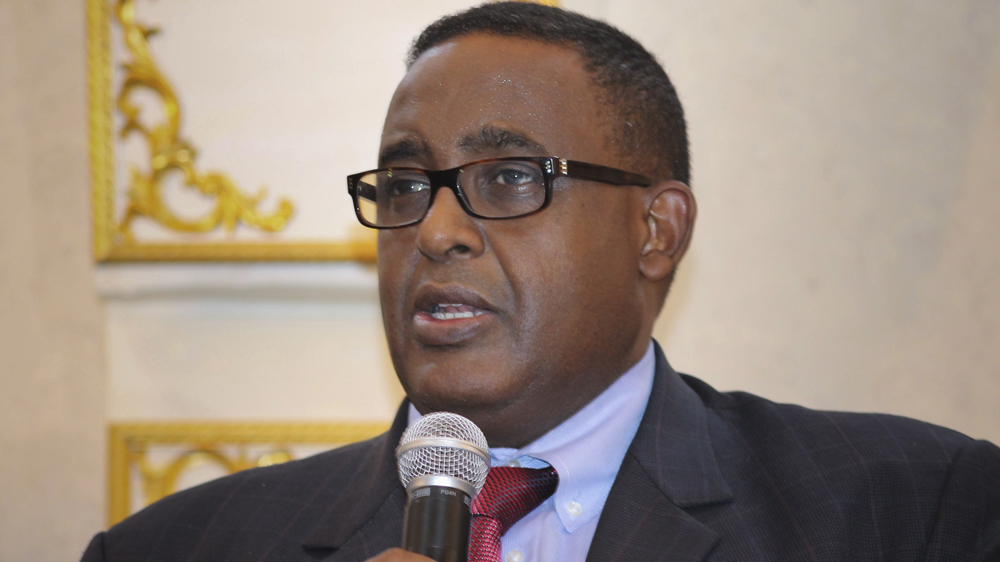 Omar Abdirashid Ali Sharmarke became Prime Minister of Somalia for a second time in December 2014 and faces a tough task in preparing the transition to a new administration in 2016.

Somalia has made significant gains against the group, but the rebels still pose a significant threat to the Somali state and its immediate neighbours.

African Union peacekeepers and Somali security forces have managed to push al-Shabab out of some the country’s major cities, but the fighters still control large swathes of the countryside in southern Somalia.

The group continues to launch periodic attacks in the capital Mogadishu, including against government institutions, and hotels frequented by government officials.

Al Jazeera’ Barry Malone talked to Sharmarke about continuing insecurity in the country, foreign investment and the possibility of ever sitting at a table with al-Shabab.

Al Jazeera: What are you doing in Qatar?

Omar Abdirashid Ali Sharmarke: Somalia is no longer equated with the negative aspects: piracy, terrorism. Now the country is ready for business. And we want to solicit with whomever wants to invest. In the end, it’s economic growth and poverty reduction that really can get so many youth in our country out of disparity. So we are pushing to move onto the investment. So we discussed ways in which Qatar could invest in the country.

AJ: You said Somali had a negative reputation around security: piracy, al-Shabab etc. Do you think that hinders investment? How can investors trust their investments will be secure in Somalia?

Sharmarke: I think Somalia is the number one country that has seen a steady decline in terrorism activities in the last few years when you compare it to other hot spots in the world. So I think Somalia is less vulnerable and the country is really moving out of this, gradually but surely.

AJ: Last night the Pentagon put out a statement saying that a US drone had killed a senior al-Shabab leader, Adan Garar. They say this man was one of the masterminds of the Westgate attack in Kenya. What do you think the impact of that strike will be?

Sharmarke: There’s no safe haven for terrorists in Somalia. Whoever commits crimes wants to be punished. The United States cooperates with us on on containing and destroying terrorist activities in Somalia. I think in the last couple of years most of the key leaders of al-Shabab were taken out. In that sense, the al-Shabab organisation is really weakened and even some are defecting to the government side. We’ve had the defection of high-profile individuals.

And there is also an amnesty in place. Whomever denounces violence, we’re ready to deal with and accommodate.

AJ: What about drones? US drone strikes get a negative press and many populations have turned against them because they say there’s a high civilian death toll. Is that a problem in Somalia?

Sharmarke: Drones have taken out key leaders of al-Shabab. The US and Somalia cooperates on that.

AJ: Is the amnesty to al-Shabab members working? How many have taken up the offer?

Sharmarke: A lot have taken up the offer. We’ve really had some high-profile people defecting. They are in the government’s hands. And we are ready to continue with this so that our young kids are not lured into these kinds of activities for nothing.

AJ: What would you say to people who say these men should be tried in court?

Sharmarke: I think whoever denounces violence and is ready to become part of society again should be given a chance.

AJ: Do you ever see a day in which you will sit down at a table with al-Shabab and speak to them?

Sharmarke: I think al-Shabab would have to denounce all violence and must denounce all the terrorist activities that they have conducted. They must really not only denounce but show that these were appalling acts that they committed.

AJ: And, if they did, do you ever see a day in which al-Shabab could actually be a political party?

Sharmarke: I think there will always be a small number who will never denounce violence and the only way is going to be to contain them and destroy them. But I think, anyone who denounces violence, we are ready to accommodate.

AJ: So those people could enter politics?

Sharmarke: It is a process, for them to get into politics. They’d have to transform in a very drastic way.

AJ: One man, one vote for the 2016 elections was what your government promised when it came to power. But you’re not in control of the entire country. So how can everyone get a vote?

AJ: A lot of your success at pushing al-Shabab back is thanks to an African Union force (AMISOM), which is made up of about 20,000 troops. When do you hope that these foreign troops can go home?

Sharmarke: Actually it wasn’t AMISOM who only did this. It was also our forces. We are grateful for AMISOM’s contribution. I think our brothers have done a tremendous job. Also our forces are doing great work to liberate all those districts. I think we are into two phases: one is to contain and destroy al-Shabab. The other is to build a national army with a national character.

Once we succeed in that, there will be a downgrading of AMISOM forces.

AJ: So when do you see that happening?

Sharmarke: I think it’s not only Somalia that’s going through such problems. And I’m glad to say that Somalia is making progress on all of those. Piracy is down almost 90 percent. There haven’t been any incidents in the last year or so. Terrorism is going down. And a large part of the country is in the hands of the government.

I think compared to other parts of the world, with what’s going on in Syria, Libya and Afghanistan, Somalia is the only country that really shows some success in really dealing with terrorism.

AJ: You lived in the United States for many years. What do you think of the portrayal of Somalia in popular culture in the West, in Hollywood movies? Black Hawk Down, Captain Phillips etc.

Sharmarke: That is why I came here to change the narrative and get away from that. Somalia is ready for business. It is no longer the country in which piracy and terrorism dominate the news. There are millions of Somalis that are moving on with their own lives. I think the country is rebuilding. I think most Somalis now have decided to pick up their own pieces and do whatever they can to better their lives.

I think that should also be part of the news. That negativity no longer fits the country. The world should now look at Somalia with different eyes.

The post Somalia PM interview: We are ready for business appeared first on African Media Agency.