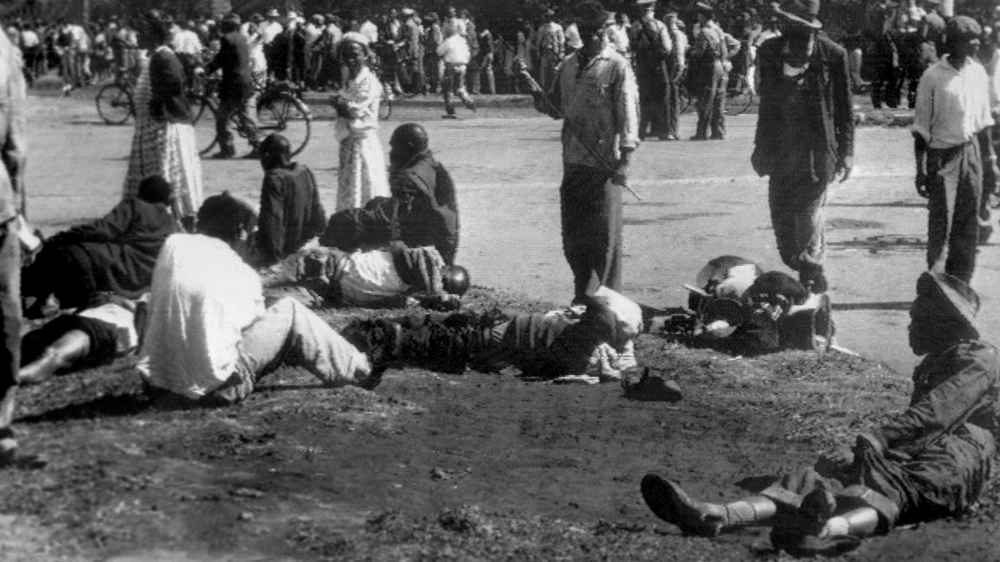 South Africans commemorate the 55th anniversary of the Sharpeville massacre on Saturday, when 69 people were killed and 180 others wounded for protesting apartheid.

The day is hallowed on the South African calendar as “Human Rights” day, but as politicians lead the nation in remembering Sharpeville, what is often forgotten about that bloody day is just as significant as what is recalled.

Those gunned down in Sharpeville, a township south of Johannesburg, were not the only ones who died on March 21,1960 protesting “pass laws” – a domestic passport that black males were ordered to carry and produce upon request – part of the segregation system that severely restricted movement.

In Langa, a shanty town close to Cape Town, police also opened fire on protesters, killing three people. At least 26 others were wounded. In the chaos that ensued, a driver who transported two journalists to the township was also killed.

At the time, the Pan Africanist Congress (PAC) – a breakaway group from the African National Congress (ANC) – had called on black males to leave their passes at home, and surrender themselves at police stations in open defiance of apartheid laws.

Thousands took part in the demonstrations in different cities across the country, and police reacted with devastating brutality to the acts of civil disobedience that had threatened to collapse the economy built on the backs of the black majority.

“As young and militant students, we felt that the time had come to fight it,” recalled Philip Kgosana, 78, who was a Pan Africanist Congress leader in the Western Cape at the time.

Kgosana was a student at University of Cape Town, but because of the country’s laws he wasn’t allowed to live at the university. He was told he could attend class but was “politely advised to go live in Langa, with the migrant workers”.

Those who remember say the resentment was palpable.

“It was the historical moment that the PAC really had its finger on the pulse,” said Shirley Gunn, from the Langa Memorial Collective.

After the shootings, anger on the streets only burgeoned.

“We felt a lot of injustice had been done because on our side, we didn’t beat the police, because these people want to force themselves on us without even listening to our grievances,” Kgosana said.

The township erupted. Members of PAC embarked on a damaging labour strike, helping to fashion another victory. The government suspended the pass law, but PAC wanted to go futher.

“That whole history, if you look at the whole iconography around it, you will see burning passes. That was not the main point of Sharpeville,” Gunn said.

Following the events in Sharpeville and Langa, Kgosana then spectacularly led according to some estimates between 30,000-50,000 protesters on a 15km march from Langa to the Caledon Square police station in Cape Town’s city centre on March 30.

He was thrown in jail and forced into solitary confinement for 21 days.

“On 29 March, the police took the decision to force us to go to work, whether we liked it or not. They stoned our homes and beat people up. The next morning, I had actually talked to about 10 people with broken arms and head wounds. It was sickening,” Kgosana said.

The apartheid regime was quick to recognise the revolutionary zeal of the events in Sharpeville and Langa, but decided to squash dissent rather than engage or reform. The consequences were far-reaching.

“An opportunity to have a peaceful negotiation in good faith was once again lost, and it just gave further impetus for the need for the PAC and the ANC to adopt an armed struggle and give up the idea of resisting peacefully,” said Emilia Potenza, curator of the Apartheid Museum in Johannesburg.

“We missed an opportunity to negotiate a peaceful change,” she said.

In April 1960, the ANC and PAC were banned and forced underground. Both parties formed armed wings in efforts to breathe new life into the resistance.

Through the 1970s and ’80s, Langa became a larger site of upheaval and dissent. On March 21, 1985, on the anniversary of the events 25 years earlier, at least 21 people were shot dead when police opened fire on hundreds of people in a funeral procession that had been banned by the state.

Measuring the impact of the Langa massacre of 1985, Derek Catsam, from the department of history at Ohio university, wrote that where the events of 1960 had resulted in the “effective quashing of a culture of massive resistance, the ‘Langa Massacre’ would prove to be a catalyst for some of the most tumultuous years in South African history”.

The killings came at a time of severe unrest across the country. South Africa was heaving under the collective weight of civil unrest in the townships, a struggling economy, and international sanctions.

Fast forward to 2015 and Langa is relatively absent from the national consciousness.

For some, the relative anonymity of Langa in the greater story of the struggle against apartheid points to the politics of selective memory. While the PAC has struggled to find relevance as a party in 21 years of South Africa’s democracy, the ANC’s dominance and ownership of the liberation narrative have coloured the way these chapters of South African history are told.

“History has been re-appropriated by the ruling party because 1994 came and we [were] looking at a new set of dates we would commemorate,” Gunn said.

In 2010, Julius Malema – then-president of the ANC Youth League and current leader of the country’s Economic Freedom Fighters (EFF) opposition party – wrote that the Sharpeville massacre “must be properly located in the struggle as led by the ANC”.

Kgosana told Al Jazeera he understands that the scale of the Sharpeville massacre snared the world’s attention, but cautions against the politics of selective memory.

“Sharpeville was of such a massive scale that there was no forgetting about it. It hit the whole world for the fact that they could see the gravity of the apartheid system and its cruelty,” Kgosana said.

In many ways, the ignored history in Langa is the story of a South Africa still living on the margins; it is in places such as Langa that the failings of democracy are most glaring.

Today, close to the hostel in Langa where Kgosana once lived as a student, a humble memorial with a mural of him in the throes of protest commemorates the march he once led.

The memorial is also a rare spot where residents are able to relieve themselves – because a space in the structure provides a lavatory – in a township that lacks basic sanitary services.

Kgosana said Langa is far from the dreams he once held as a 23-year-old revolutionary.

“Freedom is freedom when you have social freedom, economic freedom, psychological freedom, all the freedom that we need, and our people are still far, far away,” Kgosana said.

Ghana, nine others to benefit from SAP and BMZ collaboration to create more digital...