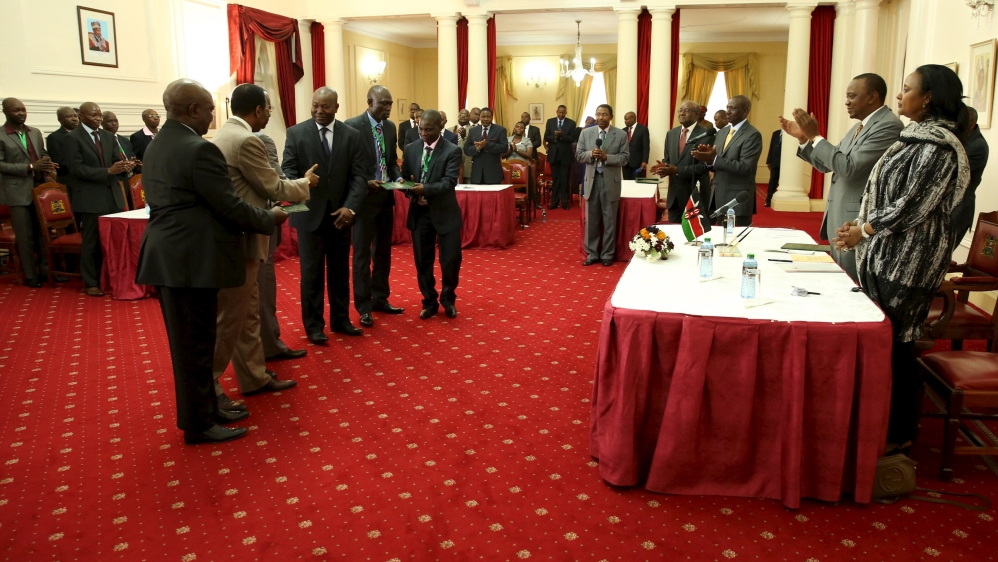 Two former presidents of the Central African Republic have signed an agreement reaffirming last year’s truce deal, but is expected to have no power as the country’s current interim government was not part of the negotiations.

The agreement between Michel Djotodia and Francois Bozize was signed on Tuesday, four months after the talks started in Kenya’s capital of Nairobi, according to Uhuru Kenyatta, the Kenyan president.

“Critics say what happened here is meaningless, but the Kenyan mediators say because they got the main fighting factions and the two former presidents to the table is still a step forward,” said Al Jazeera’s Malcolm Webb, reporting from Nairobi.

The details of the deal were not made public.

But Bozize told the AFP news agency the text signed on Tuesday contained no commitment by either former leader not to run again in the next presidential election. Negotiations on this issue “were unsuccessful,” he said.

Both men have been accused of undermining peace efforts, but in a speech after the signing of the deal Bozize said he was committed to “real peace through reconciliation”.

Djotodia said it was an “historic turning point… to find a solution to the Central African crisis”.

The Central African Republic is struggling to recover from a 2013 coup that ousted Bozize and plunged the poor, landlocked country into a spiral of violence pitting the country’s Christian and Muslim populations against each other.

The Seleka rebels seized power in March 2013 and put Djotodia in power, making him the first Muslim president of the predominantly Christian country.

Djotodia stepped down in January 2014 under strong international pressure over his failure to rein in rogue rebels, who rampaged through villages, murdering, raping and stealing, despite him ordering them to disband.

Catherine Samba-Panza, a former mayor of the capital Bangui, took over as interim leader in January 2014.

Ghana to build first RE industrial park in Africa