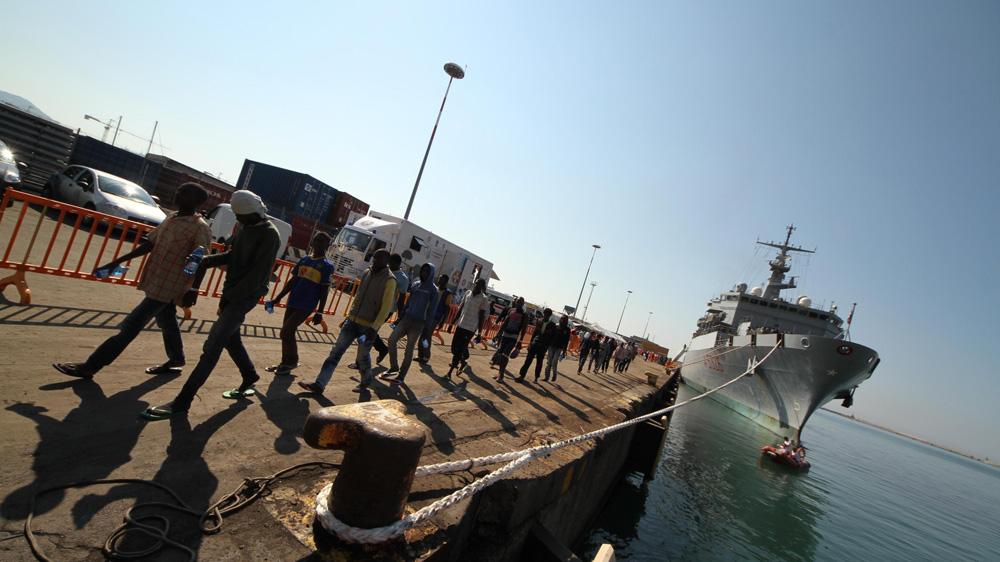 Sicily, Italy – More than 170,000 people arrived on Italy’s shores last year and with so many making the perilous journey local volunteers are trying to ensure young migrants achieve the better lives that they’ve risked everything for.

Migrants fleeing war, poverty and political instability around Africa and the Middle East hope to secure a new life in Europe through the risky Mediterranean passage in what is the largest human migration since the end of World War II, according to the International Organisation for Migration (IOM).

A boat carrying nearly 700 migrants capsized in the Mediterranean on Saturday – another disastrous journey for those desperately seeking to reach the relative security of Europe.

Pope Francis, meanwhile, made an appeal to the international community to help handle the thousands arriving on Italy’s coasts every day.

According to AccoglieRete, an organisation founded in 2013 to help unaccompanied minors arriving here, 70,000 migrants landed last year on the southwestern shores of Sicily near the city of Siracusa.

The area has a long history of losing its Sicilian youth to emigration as a result of economic woes and political corruption.

The unemployment rate in Sicily rested at 14 percent, among the highest in Italy, and the island’s semi-autonomous government was more than 5bn euros ($5.29bn) in debt as of 2011.

Some had began calling Sicily the “Greece of Italy”.

In these difficult times, however, some Sicilians have stepped forward out of a sense of civic duty to fill in where the state has proved unprepared.

“We are the door of Europe and the government looks at the problem in a general way, but it doesn’t care about the individual,” said Carla Trommino, 38, an immigration lawyer who cancelled plans to move to London and in July 2013 helped co-found AccoglieRete.

She and fellow volunteer staff were particularly concerned by the plight of unaccompanied minors, with some 4,000 arriving last year.

AccoglieRete works on multiple fronts. First and foremost it provides the courts with a list of available volunteer legal guardians to be paired with unaccompanied minors to help them access healthcare, register with the police, and guide them through the often byzantine process of getting legal documents.

AccoglieRete, however, sees its work as something deeper. It strives to be part of a process of social inclusion and integration.

Volunteer legal guardians often invite young migrants to their homes for the weekend and organise social activities. Some have even decided to be foster parents, bringing children out of large immigrant centres where most stay while in legal limbo.

“Our answer to this crisis is to have a personal relationship with the immigrants,” explained Trommino.

The results have been remarkable. When AccoglieRete was founded in 2013, children were staying with adults at the main housing centre, which volunteers believed to be a convenient recruiting pool for human traffickers linked to organised crime. Now they are housed separately.

Before AccoglieRete began shepherding migrant minors, about 60 percent of registered children disappeared from the centre, the group said. The fear was many had been lured by human trafficking networks into various forms of forced labour.

After one year, during which AccoglieRete took on more than 1,000 cases, the group said the rate of disappearances dropped to 20 percent.

Barbara Sidoti, a former UN expert on human trafficking, is of Sicilian origin but grew up in the large Sicilian diaspora in northern Italy.

After years working in Austria, Yemen, and Malawi, she’s come back to be part of what she called a movement of Sicilians trying to reclaim the island – to build a future defined by its cultural richness.

They want to contribute to an alternative vision for economic development that is not defined by corruption and organised crime.

“I looked at it as a mode of civic engagement but was surprised at how quickly I became emotionally involved,” she recalled.

Spending weekends at her house, the boys would cook Gambian food, and when they lacked the proper ingredients, they experimented with what was available.

“From this we came up with a dream project, a restaurant to fuse African and Sicilian food. Because what’s rich about Sicilian culture is that it’s a result of centuries of hybridisation between the cultures that have come here – Greek, Roman, Arab.”

By fortunate coincidence, a friend called from Catania, north of Siracusa on the west coast of Sicily, and proposed an idea.

A theatre needed a new catering company to run its restaurant. Sidoti found two partners – one of whom had been looking for a chance to open a no-waste restaurant. They combined ideas and, last October, opened their eatery named 11eleven.

Tambah Jenneh, 18, works in the kitchen under the tutelage of the head chef. He left Gambia two years ago because of a family dispute with a government official. After a 15-month journey, including six days in a small boat packed with 95 people, he arrived in Sicily.

“Some people here have never left Italy, now Africa is coming to them,” he said. “I’m proud when we make African food and the people enjoy it.”

Sidoti said she hopes the restaurant will be one of many businesses that use resources sustainably; most importantly its people, both Sicilian and new-Sicilian.

“We could leave those boys in the camps, bored. But helping bring them out creates energy, it has positive social and economic implications,” she said.

For Sicilian families who take on a foster-parent role, social inclusion takes on a personal meaning. As of now, 33 minors are with families, the beginnings of a programme Trommino would like to see grow.

Carlo and Marilena Farina were born and raised in Sicily. Like many here, they moved to the north of Italy in their early 20s for work, and moved back years later to be with ageing parents.

For a year-and-a-half they have been family for 15-year-old migrant Ramon. He left Egypt without telling his parents when he was 14 after a fight with a boy at school.

Ramon is Christian and the other boy Muslim. He said he feared the incident would escalate into a family feud with sectarian implications. Having left his country to start a new life in Europe, he now is doing well at school, and speaks fluent Italian.

“We Skype with his parents sometimes,” said Marilena. “His mom thanks me because he’s so well-behaved, and I say ‘no, thank you, he was like that when he got here’.”

They had been his legal guardians and hosted Ramon on weekends. Then he asked about the possibility of moving in on a more permanent basis.

“I wanted to be with people who would welcome me like a member of their family,” said Ramon.

The desire was mutual as Marilena and Carlo never had children. “It was something missing in our lives, he completes me,” Marilena said.

“It was a shock for people at first when all these people started showing up,” said Carlo. “We were totally unprepared. The state didn’t know what to do.”

But at least some Sicilians have stepped in to help, he said.

Carla Trommino looks at it rather matter-of-factly. “You can’t stop human migration. All you can do is decide how you are going to respond it.”

Ethiopia, Burundi can do more to capitalise on growing niche markets for coffee