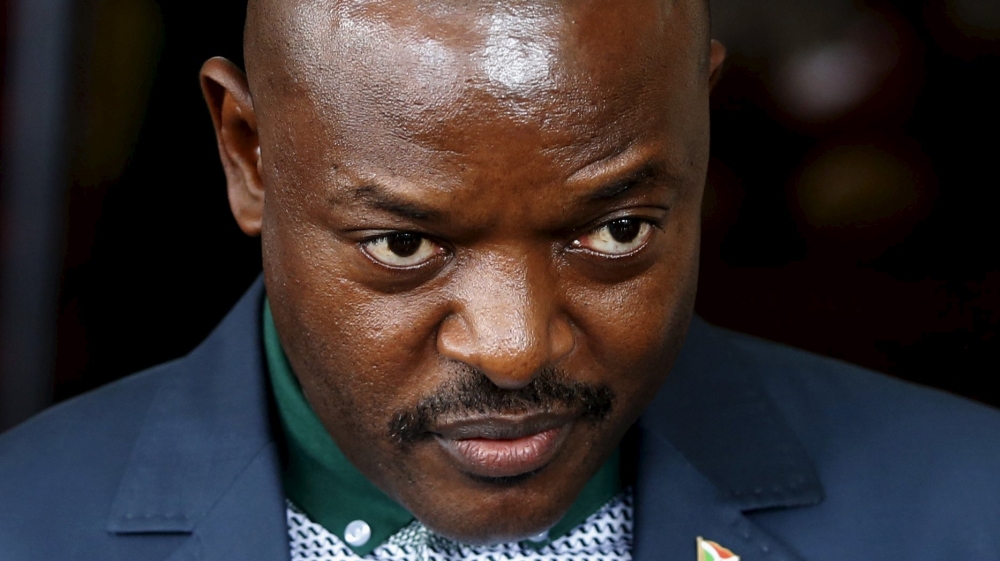 Burundi President Pierre Nkurunziza has dismissed his defence and foreign ministers after last week’s failed military coup, according to a presidential spokesperson.

Emmanuel Ntahonvukiye, a civilian, was named on Monday to replace Pontian Gaciyubwenge, the defence minister, while Alain Aime Nyamitwe was appointed foreign minister to succeed Laurent Kavakure, the spokesperson said.

Al Jazeera’s Haru Mutasa, reporting from the capital Bujumbura, said Nkurunziza was “under a lot of pressure” not to stand for a controversial third term and perhaps he had put trusted allies in those positions “who won’t try to stab him in the back”.

Earlier on Monday, Uhuru Kenyatta, the Kenyan president, told Nkurunziza that he should postpone a presidential election due next month after last week’s failed military coup, Kenyatta’s spokesperson said.

Manoah Esipisu, the spokesperson, said the two leaders, whose nations belong to the East African Community (EAC) common market, had spoken by phone on Sunday. Kenyatta’s counterparts in the region shared his view, Esipisu said.

On Monday, heavily armed soldiers were deployed in Bujumbura, days after the failed coup attempt that followed widespread protests against Nkurunziza’s decision to seek a third term.

In the Musaga neighbourhood, armed soldiers faced off on Monday with hundreds of angry protesters calling on Nkurunziza to rescind his decision, which many say is unconstitutional.

Al Jazeera’s Mutasa said at least one person was believed to have been shot during the protests.

The soldiers were seen armed with machine guns and rocket-propelled grenade launchers.

There was no police presence, signalling the army, which previously had acted as a buffer between protesters and the police, has now taken over operations against demonstrators.

Regional leaders want the election date changed from June 26 to create a “conducive environment” but the vote should still be held within the current electoral cycle, which comes to an end in late August, Kenya’s Esipisu said.

Making his first appearance in Bujumbura since last week’s attempted coup, Nkurunziza said on Sunday that he has been battling a threat from Somali armed group al-Shabab.

“We are very preoccupied by al-Shabab’s well-known attack. You know that Burundi has contributed to sending troops to Somalia so we came here to contact our friends and colleagues here in Kenya as well as in Uganda,” Nkurunziza said.

“Both are privileged targets for al-Shabab. The agenda is to put in place proactive measures to face these attacks that are a security risk to the citizens of Burundi.”

But the Somalia-based al-Qaeda-linked group denied on Sunday the Burundian leader’s claim of planned attack.

“We think that this is an attempt by him to appease his people, who are standing in the streets protesting against his dictatorship, or to divert the world’s attention from him while he possibly prepares his mass revenge,” Sheikh Ali Mahamud Rage, al-Shabab spokesperson, said in a statement to Reuters news agency.

The landlocked East African nation has been plunged into crisis since Nkurunziza pushed for a third term of office, a move his opponents say breaks the constitution and a 2005 peace agreement that ended an ethnically driven civil war.

As many as 300,000 people died in the war, and there are fears the current crisis could inflame lingering tensions between the majority Hutu population and the Tutsi minority.

More than 105,000 Burundians have fled the country, with 70,000 crossing into Tanzania alone , since the political crisis began.

African refugees held captive in Libya to go to Rwanda in coming weeks –...

African growth dims, but ignore region at your peril