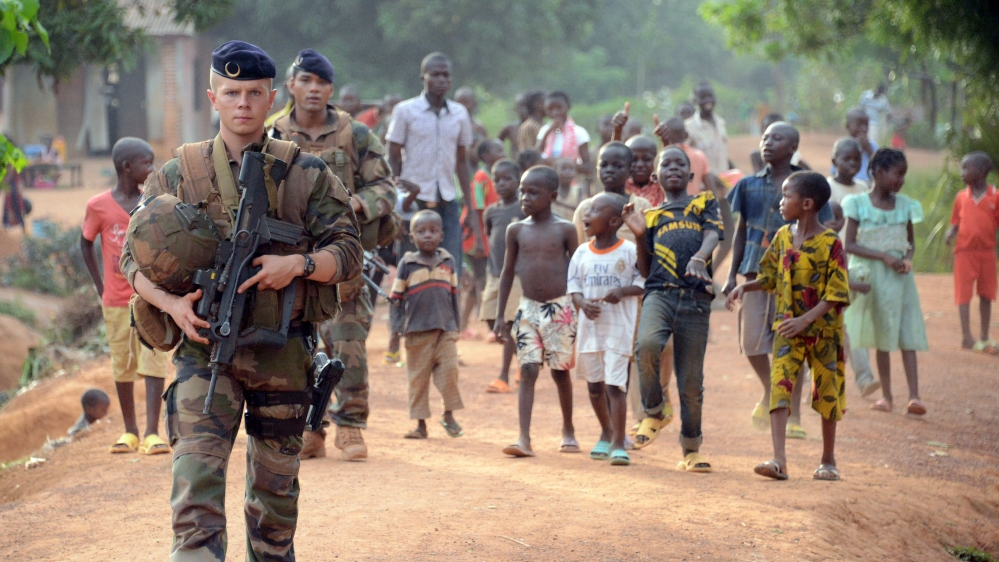 In late March, a report commissioned by the Colombian government claimed that US military soldiers and contractors had sexually abused at least 54 children in Colombia between 2003 and 2007, emphasising that the perpetrators had not been brought to justice on account of diplomatic agreements between the US and Colombia which protect US military personnel from prosecution.

While this report made some headlines in Latin America, the US and European media barely mentioned the story – nor did international human rights organisations. Yet last week’s revelations that French troops sexually abused children in the Central African Republic in 2014 have drawn global media attention. This scandal has raised diplomatic tensions, led to the suspension of a senior UN official – and the reason for the widespread outrage is that it appears the United Nations sought to bury an internal report detailing the abuses.

France intervened in the Central African Republic in December 2013, months after a rebel group took over the capital and overthrew President Francois Bozize.

The subsequent violence between Muslim and Christian militias led to the displacement of hundreds of thousands of people, into neighbouring states, but also into makeshift camps for those internally displaced.

It is in one such camp near the airport of the capital Bangui where the alleged abuses took place. A United Nations report that came to light last week alleges that between December 2013 and June 2014, 14 French soldiers and five troops from Chad and Equatorial Guinea forced children to perform sex acts in exchange for food or money.

When the UN did not take action, a high-ranking UN official by the name of Anders Kompass handed the report – titled “Sexual Abuse on Children by International Armed Forces” – to the French authorities who then launched their own investigation.

Since The Guardian broke this story, French officials have responded quickly.

“If some soldiers behaved badly, I will be merciless,” declared President Francois Hollande, “If this information is confirmed, there will be exemplary sanctions.”

Likewise the French Minister of Defence Jean-Yves Le Drian stated that upon being alerted by the UN, he gave the report to French court prosecutors and had the army carry out an internal investigation in August 2014. But he also conceded that “very few” perpetrators had been identified, and he asked to them to turn themselves in.

But the story is no longer simply about the misconduct of French troops, but also about how the UN responds to cases of sexual abuse. UN officials claim that their peacekeeping troops and the UN mission started after the French mission began, and that the French troops were not under UN control. That is true, but UN troops were sent in to support French soldiers, and UN officials were aware of the abuse but simply sat on the report.

Since the story came to light, Anders Kompass, the Swedish UN official who leaked the internal report to the French government, has been suspended for sharing confidential information and breaching UN protocol – a decision endorsed by Zeid Raad al-Hussein, the high commissioner for human rights, and Susana Malcorra, the current United Nations chef de cabinet to the executive office.

UN officials claim that what he leaked was a draft that had the unredacted names of victims and informants who could be endangered.

A diplomatic crisis is now brewing between Sweden and the UN, as earlier this month the Swedish ambassador to the United Nations cautioned senior UN officials that “it would not be a good thing if the high commissioner for human rights forced” Kompass to resign. The Swedish government has not issued a statement since Kompass’ dismissal.

Various NGOs are now arguing that Kompass was suspended because the UN tried to bury the report, and because of a past record of peacekeepers engaging in sexual abuse in the Congo, Haiti, and Sudan. Activists are calling for an independent commission inquiry.

Paula Donovan, co-director of the advocacy group Aids Free World, declared: “The UN’s instinctive response to sexual violence in its ranks – ignore, deny, cover up, dissemble – must be subjected to a truly independent commission of inquiry with total access, top to bottom, and full subpoena power.”

Raad al-Hussein is, after all, the author of the 2005 Zeid Report, which presented a detailed analysis of sexual exploitation in UN peacekeeping missions, and laid out the organisation’s zero tolerance policy for sexual abuse by UN peacekeepers.

But this policy does not apply to troops not fighting under UN umbrella as was the case with the French in CAR. The UN after all does not have the ability to prosecute troops even those under UN control – it is the member states that are responsible for prosecution.

What this scandal actually reveals is how difficult it is for the UN to deal with abuse committed by the troops of a powerful state, and a permanent member of the Security Council, on whom the international organisation relies for funds and manpower. The UN, lest we forget, is not an independent actor but reflects and is constrained by the interests and capacities of myriad states.

Hisham Aidi teaches at Columbia University. He is the author of the critically acclaimed Rebel Music: Race, Empire and the New Muslim Youth Culture, a study of black internationalism and global youth culture.