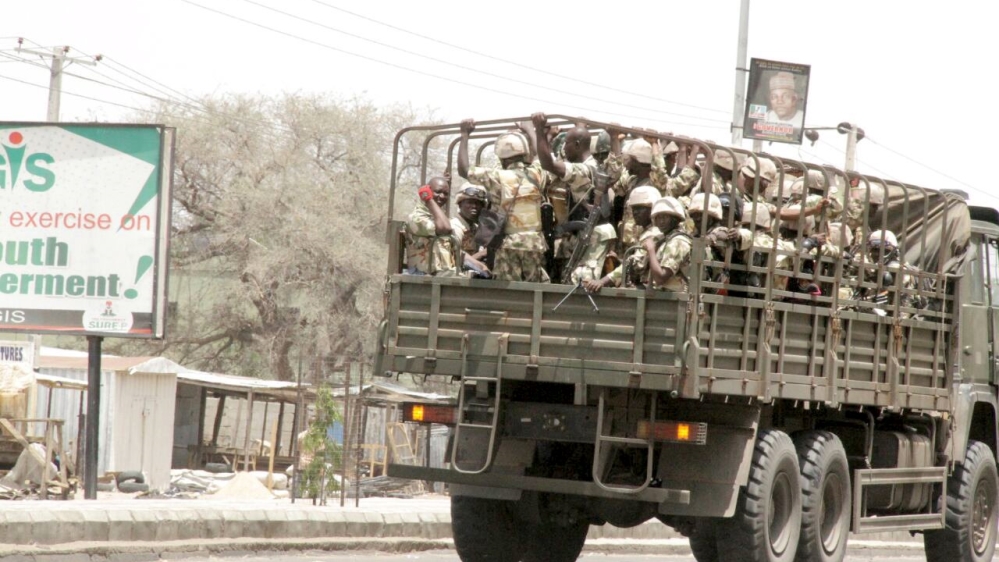 Lagos, Nigeria – The Nigerian military, including nine senior commanders, should be investigated for their role in shooting, starving, suffocating and torturing thousands of people to death during the fight against Boko Haram, Amnesty International says.

More than 7,000 boys and young men have died under military detention since March 2011, the UK-based rights organisation says in a new report, Stars on Their Shoulders. Blood on their Hands.

A further 1,200 have been rounded up and extra-judicially killed since February 2012, it says.

A senior military figure told Amnesty that it was common for soldiers to “go to the nearest place and kill all the youths”. “People killed may be innocent and not armed,” he said.

At least 20,000 young males, some only nine years old, have been arrested since 2009, when the Boko Haram began their military campaign against the Nigerian government.

In most cases, the arrests have been illegal. Detainees have been kept in cramped cells with little food or water, without investigation or trial, Amnesty says.

“This sickening evidence exposes how thousands of young men and boys have been arbitrarily arrested and deliberately killed or left to die in detention in the most horrific conditions,” Salil Shetty, Amnesty International’s secretary-general, said.

The report, which drew on leaked military reports as well as interviews with victims and security forces, states that senior commanders either sanctioned the abuses, or ignored them when they took place.

Nine senior officers should be urgently probed for individual or command responsibilities for the human rights abuses, Amnesty says.

Those include General Ken Minimah, the incumbent chief of army staff; Air Chief Marshal Badeh, the chief of defence staff; and both of their predecessors.

Nigeria’s security forces grew increasingly heavy-handed as momentum turned against them in the fight against Boko Haram.

At the height of their strength in January, the fighters were controlling an area of northeastern Nigeria that was roughly the size of Belgium.

Multiple allegations of human-right abuses have been levelled against the military, prompting Western governments to cut arms sales to the country.

“We shall improve operational and legal mechanisms so that disciplinary steps are taken against proven human right violations by the armed forces,” he said.

“Amnesty’s revelations will more than likely serve as a litmus test of President Buhari’s commitment to respond to the ill-discipline of Nigeria’s armed forces,” said Ryan Cummings, chief security analyst for Africa at the South Africa-based consultancy Red24.

“We are not only calling for individuals to be investigated,” Anna Niestat, Amnesty’s senior director of research, told Al Jazeera.

“Safeguards must be put in place to combat this endless cycle of impunity and abuses.”

Garba Shehu, a spokesperson for President Buhari, said that his attention would be drawn to the report when he emerges from meetings in Niamey, Niger, on Wednesday.

‘Slavery was a tragedy’: Melania visits slave castle in Ghana