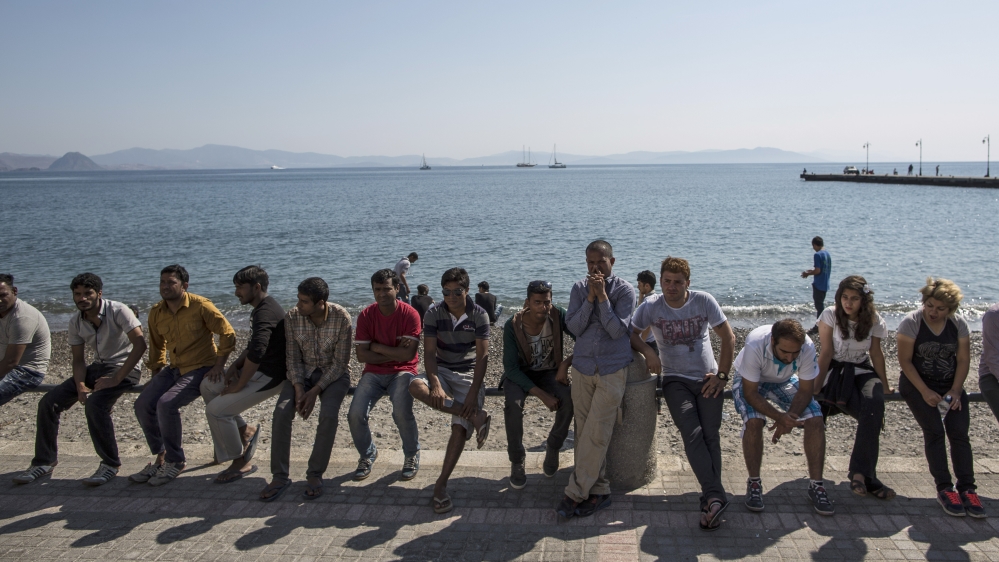 Last week, the European Commission, the centralised administrative body overseeing a growing number of European Union member countries’ policies, announced the first proposals it will be adopting to improve “the management of migration”.

“Everyone who needs sanctuary should find it in Europe,” a top bureaucrat said but only after noting that “solidarity goes hand in hand with responsibility”.

One might get the impression that all will move along smoothly, bringing progress, order and humanity to the crisis and chaos to the south and east of what – according to the latest projections – used to be the world’s most prosperous area before being surpassed by China.

Tens of thousands are fleeing war and poverty in Africa, Asia, the Middle East, and Central Asia, risking, and often losing, their lives in their efforts to reach the so-called safe harbour of Europe. So far this year, some 2,000 migrants have perished attempting to cross the Mediterranean.

Migrants face hardship and exploitation every step of the way. So this latest set of European measures ostensibly comes as a response to recent tragedies, especially off the shores of Libya which has become one of the main stopover points for migrants wishing to reach Europe.

But apart from commendable assistance measures, such as the granting of aid to Lebanon, Turkey, Jordan, and Iraq, countries bearing the brunt of Syrian and Iraq refugees fleeing ISIL, there is no denying that European countries are looking to increase their military presence in the Mediterranean and at the same time impose controls on old and new arrivals – be they economic migrants, refugees or exiles. The reasoning behind this is to deal with smuggler networks.

There is no denying that such networks exist, feeding off the most vulnerable. Moreover, these networks are not just made up of sly foreigners. In Greece, which along with Italy faces the greatest number of migrant inflows this year, there were recent leaked reports that top police officers and security services personnel were under investigation for working together with people-traffickers in Turkey and beyond. But will “10 maritime, 33 land and 8 air assets, and 121 human resources”, disposing of smugglers’ boats “or rendering them inoperable” do the trick?

For one, it is deeply worrying that despite the horrible situation in Libya, what is left of its government immediately rejected the measures when they started being made public. Indeed, what would a “European Union military operation in the Southern Central Mediterranean” actually entail? And would US-led NATO have a role?

One may laugh – or flinch – after watching EU and NATO dignitaries singing “We are the World” at a conference in Turkey but then again one should pay closer attention to what else is happening.

A top British military commander said that NATO could aid the EU’s migrant mission if there were political will, while Italy’s foreign minister has suggested that NATO’s current counter-terrorism naval mission could be modified.

After all, the military hardware and personnel is already there. As a US admiral noted, “[s]ailors from Algeria, Croatia, Egypt, France, Greece, Italy, Malta, Mauritania, Morocco, Spain, Tunisia, Turkey and the United States all in one place – talk about your Global Network of Navies”.

A trend for militarising migration is becoming apparent under a veneer of humanitarian lyricism, especially if one digs deeper.

Apostolos Fotiadis, a journalist and author who has been covering the migrant issue for years, sees the EU clearly moving away from rescue operations and into what he calls “securitisation“.

It seems the “responsibility” element of emerging European migrant policies can take on many meanings. But perhaps there are other considerations. As Fotiadis found, such policies assure huge budgets from European taxpayers.

Recent research shows that Europeans strongly believe that Europe should keep spending money on humanitarian aid. This provides an opportunity (in this case saving lives and combating evil human traffickers) for further centralisation of political power in the European Union, with supra-national structures absorbing more power from national ones.

As for migrants themselves, they can be assured that at least they will be fingerprinted and put in a database when reaching Europe, making it clear to them that they have reached a destination where things function, at least at the technological level. And those among them who can qualify for asylum, eventually will start anew.

Too bad they couldn’t apply before becoming the victims of the traffickers that Europe is so keen on confronting. Oh, what about those who do not qualify for asylum? Well, that is another matter altogether, sadly, if we knew how many of them there actually are.

Menelaos Tzafalias is a freelance journalist and producer based in Athens, Greece. He has worked as an associate producer on the documentary “Palikari: Louis Tikas and the Ludlow Massacre”, a story about migrants and labour relations in early 20th century US.

A Case of Double Standards