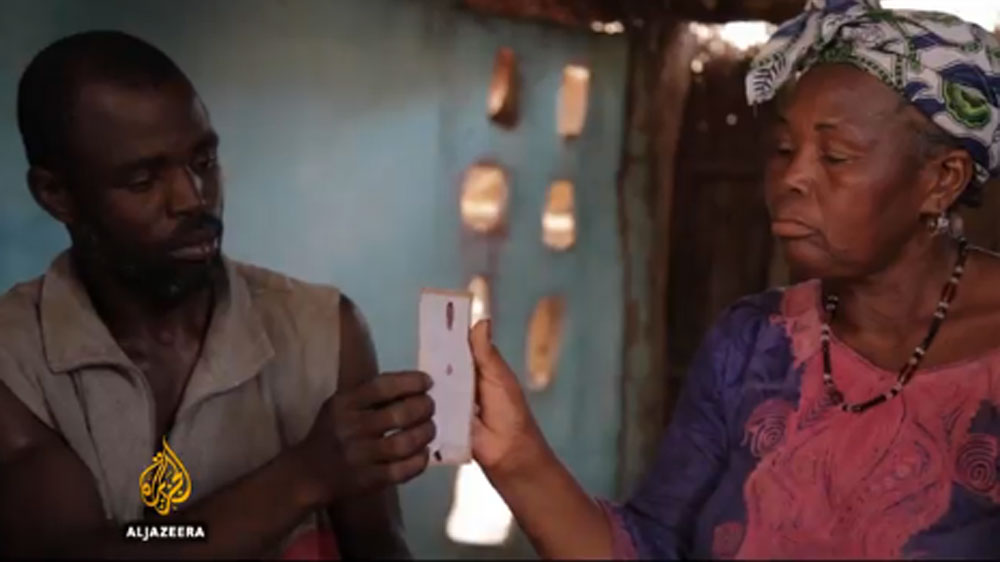 We drove fast, our windows open, the car radio blaring, for 10 hours, deep into the Senegalese countryside, the roaring sound of hot dry air blowing into the car.

Outside lay the African savannah – and the immense possibilities of escape.

Along this road leading to the Sahara Desert, villages are rare. They appear unannounced like an opportunity. A relief from the monotony of what felt like an endless journey.

It is in one such village that my cameraman Jose and I stopped, a chance for him to smoke a cigarette and for me to assess our surroundings. A few huts in the near distance, dry sandy earth, abandoned tractors, plastic bags blowing in the wind.

Mechanically we took our cameras out to capture the atmosphere. And then we stopped.

The silence was overwhelming. So much so that it made me feel uncomfortable.

Jose and I entered the village in search of people to talk to. We were met with more silence. Some turned their backs to us. We were strangers after all.

Other journalists had already come and gone. Perhaps they felt exposed, or vulnerable. But no, that wasn’t it. These villagers carry a secret.

Countless villagers have died escaping this region to go to Europe.

Leaning against a hut, Jose shared a cigarette, igniting a conversation with Mahmadou Bah.

His brother had gone to Europe along with all the other farmers, but he hadn’t heard from him for more than a month.

The night his brother crossed the Mediterranean, a boat carrying migrants capsized. About 700 migrants drowned and an estimated 200 of them were Senegalese.

At the beginning of the year, Senegalese crossings into Italy outnumbered the refugees from war torn Syria and Somalia.

There is no war or conflict in Senegal. The country is a vibrant, long-standing democracy.

The economy is growing but not fast enough to provide jobs for so many young Senegalese men.

The villages around Tambacounda are farming communities. Peanuts are their crop, the only thing that grows here, and this year’s drought has been particularly bad.

So for every villager that dies trying to make it Europe there are many more willing to make the trip.

The money migrants send back to their families is the lifeline of this village. Senegalese migrants sent back $1.4bn to their country last year.

Inside the hut, huddled around the picture of Bah’s brother are his mother, sisters and children.

They incurred debts to pay for his travel. More than a thousand dollars, a small fortune for this family. They still hope he made it across. Chances are they will never hear from him again.

Under the shade of a lone baobab tree, is Bah’s father, holding himself at a distance. He wouldn’t talk. When I glance over to him, he smiles politely.

I recognise that smile. Behind it hides an anxious parent too proud or too scared to show his emotions.

I had seen this before in the Rohingya camps of southern Bangladesh.

Before coming to Senegal, I spent years reporting on the Rohingya refugees fleeing Myanmar and looking to travel by boat to Malaysia.

Each family member I met had a relative that had attempted the journey.

A different continent, a different people but carrying that same anxiety of trying to find a better opportunity while carrying the guilt and shame that goes with sending a loved one away to never hear from him again.

On the long drive home, Jose and I talked about our past, of the people we left behind.

Jose was born in Venezuela of Spanish parents from Galicia.

We are migrants telling the story of other migrants.

In America successful migrants are celebrated, in Europe less so. In Africa, migrants who make it enjoy status but those who don’t, leave their families with an unspoken burden of loss.

And so, as I looked out of the window into the African savannah, I recognised in their tale, our tale, and this desire for the opportunity to live a decent life.

Morocco-Nigeria Gas Pipeline Project is a milestone for regional integration